Later than scheduled, the 2020/21 Champions League group stages finally get underway this week. The start of this season’s competition has been delayed due to the extension of last campaign and the summer tournament in Lisbon.

Bayern Munich, the victors in Portugal after beating Paris Saint-Germain in the final, will be aiming to defend their title this time out. They’ll have competition from Spain, though, as LaLiga’s top clubs seek more European glory.

The holders have strengthened this summer, with Leroy Sane the outstanding addition from their transfer business. The forward will provide competition to Serge Gnabry and Kingsley Coman in Hansi Flick’s goalscoring machine of a team.

The last minute departure of Thomas Partey has scuppered Diego Simeone‘s plans for the season, although Lucas Torreira has been brought in as a replacement. With Jan Oblak in goal and Joao Felix and Luis Suarez up front, Atletico will be looking to show that their elimination of Liverpool last season wasn’t just a flash in the pan.

The Austrians outscored Liverpool and Napoli in their group last season thanks, in part, to Erling Haaland, and now they face the stern test of finding a way past both Atletico and Bayern.

It will be a third season in a row in the competition for the Russians, who met Atletico in last year’s group stages.

The kings of the Champions League have spent the last two campaigns waving goodbye at the last 16 stage. Zinedine Zidane has more or less the same team as last season, adding Martin Odegaard to the mix in midfield. With a lack of goals throughout the team, Karim Benzema and Sergio Ramos will be charged with leading the team to glory in that department while Thibaut Courtois keeps the back door closed.

A staple in the Champions League group stages, the Ukrainian champions have it tough trying to progress ahead of Real Madrid and Inter.

Antonio Conte has one of the most complete squads in Europe. Romelu Lukaku and Lautaro Martinez are dynamite up front, Christian Eriksen and Arturo Vidal offer different qualities in midfield, while Ivan Perisic is back from his loan at Bayern.

The Bundesliga outfit will hope it’s third time lucky in terms of progressing to the knockout stages, having failed to do so in their previous two attempts at this level.

Pep Guardiola has strengthened his defence with the arrivals of Ruben Dias and Nathan Ake as he looks to bring the Champions League trophy to the blue half of Manchester for the first time. The creativity of Kevin de Bruyne and goals of Raheem Sterling make City one of the favourites.

Youssef El-Arabi is the big star at Olympiacos these days, firing his side to the Greek title last season. The Moroccan is joined in attack by the likes of Mathieu Valbuena and Kostas Fortounis.

After six seasons away, Marseille return to the Champions League with a squad packed with attacking talent, such as Florian Thauvin and Dimitri Payet.

The 2018/19 Champions League winners and defending Premier League champions have been struck by injury misfortune, with Virgil van Dijk now set to miss most of the season. As a result, there is even more emphasis on the attacking output of Sadio Mane, Mohamed Salah and Roberto Firmino.

Hakim Ziyech, Donny van de Beek, Sergino Dest and Joel Veltman may have moved on but Erik ten Hag still has the likes of Dusan Tadic, David Neres and Andre Onana at his disposal.

After going out in the quarter-finals in their debut Champions League campaign last season, Gian Piero Gasperini’s attack-minded team will have their sights set on another memorable European adventure.

The Danish minnows, owned my mathematics fanatic Matthew Benham, are owe much of their success to the usage of statistical algorithms.

August’s Europa League success will still be fresh in the mind of Julen Lopetegui’s men. Back in the big time this season, they’ve acquired the stellar name of Ivan Rakitic – for a second time – and kept Diego Carlos and Jules Kounde in defence, although Sergio Reguilon hasn’t returned.

After spending more than any other club in Europe this summer – 247 million euros to be precise – Frank Lampard has work to do to fit new signings Timo Werner, Kai Havertz, Hakim Ziyech and the like into a team capable of achieving success in Europe. Problems remain in defence, though.

In an open group, the Russians have a decent chance of qualifying for the knockout stages for the first time in their history.

Debutants at this level, Rennes have added the likes of Daniele Rugani, Dalbert and Jeremy Doku to a squad already containing the hugely talented Eduardo Camavinga.

Champions of Russia for the last two seasons, Zenit have signed Dejan Lovren to add a touch of European pedigree to their ranks.

Simone Inzaghi’s men were the surprise package in Serie A last season, booking a spot in the Champions League thanks partially to the goals of Ciro Immobile.

Having been dumped in a group with PSG and Real Madrid last season, the Belgians have a better, if still slim, chance of qualifying for the knockout stages this time around.

Winning another Serie A title wasn’t enough for Maurizio Sarri to keep his job, with Juve bringing in Andrea Pirlo in the hope their former player can conjure up a Champions League winning side at last. With Cristiano Ronaldo, the competition’s top scorer, anything is possible.

After humiliating exits to Roma and Liverpool in recent years, the 8-2 defeat to Bayern Munich in Lisbon was the final straw for Barcelona’s latest generation. Arthur Melo, Nelson Semedo, Rakitic, Suarez, Rafinha and Vidal have all departed, allowing Miralem Pjanic, Dest, Trincao and Pedri to freshen up the squad. Lionel Messi has stayed put after a turbulent summer and Ronald Koeman is still mulling over how to get the best out of Antoine Griezmann.

After three years of watching it on TV, the Ukrainian giants are back in Europe’s elite club competition after knocking out Gent and AZ in the qualifiers.

The 31 time Hungarian champions are find themselves in a group packed with superstars. They’ve waited 25 years for another Champions League appearance.

Revenge is in the air at the Parc des Princes. Last season’s beaten finalists have been paired with Manchester United, who knocked them out of the 2018/19 edition in sensational fashion.

The arrival of Bruno Fernandes in January spurred Ole Gunnar Solskjaer’s side towards a Champions League place. A 6-1 thrashing at the hands of Tottenham prompted the Red Devils to bring in Edinson Cavani and Telles among others on transfer deadline day.

Unlikely semi-finalists last time out, Julian Nagelsmann‘s side will be quietly confident they can progress from this group against expectations again. The absence of Werner wasn’t felt in Lisbon and the German side will hope it stays that way.

The Turkish champions have endured a torrid start to their title defence in the Super Lig. They’ve been paired with two giants of the European game in their Champions League debut season. 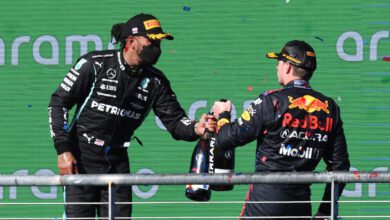